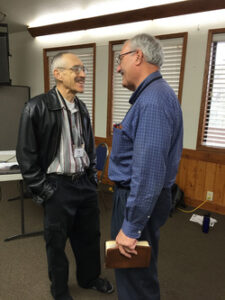 "It was life-changing!" - Scott McConnell, My Father's House of Prayer, Spokane

Spokane has a rich history of Pastors Prayer Summits from 1991-2004. After a ten-year hiatus, Spokane prayer summits were joyously re-ignited at the Lord’s command with three days at Ross Point Conference Center in Post Falls, October 13-15, 2014. Ross Point provided a beautiful riverside setting for summit attendees to be all together in worship, prayer and other private times, small groups, breaks and table fellowship. The gathering was similar to earlier prayer Spokane prayer summits and retreats, but new and different with worship leaders that led us into the presence of God. It was billed as a Spokane Regional Leaders Prayer Summit with a broader invitation including not only pastors and ministry leaders, but also marketplace, civic/government and prayer leaders as well (men and women), i.e. all of the leaders that God has called to stand together for his kingdom work in the city.

The investment of three days and two nights meeting with God was well worth it. As we came to draw close, our Father came close to us. Worship lifted us into the Lord’s presence and fueled our times of prayer and listening. Spirits were revived and hearts were freshly circumcised. New friendships were formed quickly as old ones were renewed, refreshed and reconciled. The body of Christ came closer together and returned home with new connections and in better working order.

Prayer summits had been re-birthed and re-ignited in Spokane. Now, each new year's prayer summit moves the body of Christ in Spokane forward.

Why a Prayer Summit?

These “meetings with God” focus the ongoing movement of prayer that undergirds the well-being of the city. They strengthen city leadership for their joint work on city gospel teams. They help equip leaders, connect communities and catalyze movements leading to the radiance of the Lord Jesus Christ becoming visible in Spokane.

It is impossible to put into words all that the Lord does among us as we come aside for three days together with him and each other. We hope that you are hearing Holy Spirit indicate that you are to come this year.

The four of us who were originally inspired to re-ignite Spokane prayer summits in 2014 are pleased that the Spokane Prayer Summit continues every year. We invite you to register for and attend the 2023 Spokane Regional Leaders Prayer Summit at Ross Point, Monday-Wednesday February 20 - 22, 2023